The Internet group management protocol (IGMP) provides a computer on the Internet with a method for reporting its multi-cast group membership to adjacent routers. Using multi-casting, one computer on the Internet can send content to several other computers which have indicated  their interest in receiving the content from the computer responsible for the origination of the transmission. IGMP is a network layer protocol, as far as the OSI reference modal is concerned.

MBONE is an extension to the Internet that supports two-way transmission of data between multiple Internet sites using IP multicasting . in multicasting, one packet can be sent to many destination. It is not needed to split the packets at the source of message itself. The packet can pass through many routers any for dividing them to reach their final destination arises. This leads to not just efficient transmission but also delivery of packets to several destinations at almost the same time. Currently, the widest use of the MBONE is in real-time video and audio transmission.

A very important and valuable service on computer networks is Netnews or Usenet news. It is a significant resource for online assistance on various issues or topic owing to the good quality discussion groups provided by it. Usenet neither has a centralized authority for operations control nor does it from a part of any organization. It is merely a collaboration of individual sites exchanging news between them. If you wish to make use of a Usenet site, you first have to contact another Usenet site and make  an agreement with the site owners/maintainers for exchange of news with you. if a site provides news to another site then it is called feeding the site that receives  the news. The basic unit if Usenet news is the article, which is message a user write and posts to Usenet site. Articles are submitted to either a single or multiple newsgroups. A newsgroup is actually a forum for articles on a common theme or topic. All newspapers follow a hierarchy and the name of each group indicates its position in the order or hierarchy. All Usenet sites wishing to carry news from this group exchange the articles amongst them. Once two sites agree to exchange news, they are free to not only exchange any newsgroup, they can also add their own local news hierarchies. For example, a Usenet site abc.edu has a news link to efg.edu and several link to other sites, which it feed news. Efg.edu might receive all the Usenet groups, while abc.edu carries a few major hierarchies such as sci, comp, or rec. Another Usenet site pqr.edu receives newsgroup from the fj hierarchy of the Usenet site Imm.edu. The news flows is shown in figure. 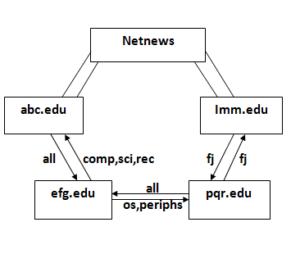